Health Issues and its Relation to Schooling and Learning

The huge influx of immigrants escaping war zones, miserable living conditions, oppression and other difficulties in their home countries means many challenges to the Swedish society in general, and more specific our interest is directed to how the Swedish school shall be able to cope with this challenge. Receiving hundreds of thousands new pupils holds many different difficulties. What is in focus here is the relation between the newly arrived pupils’ health and their ability to learn, and by so, be able to pass the requirements for entry upper secondary. This focus by necessity includes knowledge and ways of behaviour among their teachers and supporting staff, such as health care officers.

Aim of this study

Research in different aspects of health care is enormous in volume, status and has tremendous economical implications. The same goes for research in educational sciences though it maybe does not have the same status and economical implications, in the sense that an individual will not become rich from studies in education. The interest for the relation between health and school success or school failure is not as prominent in research, authority reports and societal discourse, as one would imagine (Eriksson 2012). The general aim for this investigation is to highlight and discuss the current knowledge and discourses, which also means to find the lack of knowledge in this field. In focus in this investigation is the relation between immigrants’ health status and the possibilities to succeed as a student in school (and maybe also the other way round. That is; if/what/how time and effort in studies in a school influence health status).

The sketched background in current Swedish research and different research and development projects shall be completed with interviews and case studies in three educational settings.  This will enable us to present results as:

The work by our partners in Liverpool and Berlin will enable us to discuss the research and investigating questions and the findings presented in comparative international perspectives. The comparative approach is expected to enrich the study both in design and findings. This expectation is underlined by the different traditions, contexts and knowledge bases among the partners.

Sweden is supposed to provide advanced and reliable health care to all citizens. Measures that is comparable to other western countries, as well as developing countries, such as life length, children mortality, mortality in different diseases, availability in general and specialized health care etc. shows that Sweden is ranked high. But there are also reports about an increasing number of psychological disorders such as depression and fatigue in many life spans, and significantly high among girls and young women. Swedish public health care has since long been financed from taxes and is politically governed, together with a strong influence from the professional groups. There is an on going discussion about inequalities in health care in Sweden (ref. pågående utredning). According to Swedish law health care shall be available to every citizen and the most sick shall be the first in the queue. This principle has been altered by an increasing stock of private health insurances. This means that an elite is given a fast track to the best hospitals and advanced health care. There is also evidence of significant regional differences between the big cities and rural areas and between different hospitals. Research also points to inequalities between sexes with a disadvantage for diagnosis and treatment for women. There are so many different discussions about policy-making in the health care sector that it is often hard to have voice in the noise. One report that was on the news headlines, anyway for some days, was a report showing that the length of life in the Stockholm area differed 19 years when plotted along an underground line. This was a brutal truth of the inequalities between people in the deprived and underprivileged part of the city compared to the richer parts.

Health care and the school

In the Swedish school law it is stated that the school shall provide, what is termed, “pupil health care” that shall include medical, psychological, psychosocial and special needs support. It is also regulated in law that this implies availability of such expertise as doctors, nurses, psychologists and counsellors. In addition it is stated that the school health care shall work proactive and promote health and support the pupils development towards goals.

This description does not mean that a school has a hospital or a local medical centre available for the pupils. It is rather about to provide a couple of medical checks during the time in school. The regulations about the mission for the school health care implies that the work carried out by the health professionals is more on a systemic level, trying to achieve a focus on health issues on an organizational level. But from proven evidence one can assume that the health professionals in schools may in many cases play an important role as the ones that spot medical and mental problems and can help the child to get in contact with the public medical care.

For the Swedish case the relation health and schooling is focussed in general and particularly our focus is on children and young people that are newly arrived asylum seekers. The total number of newly arrived children and young people was about 70 000 year 2015. Among those are an increasing number of unaccompanied children and young people. Year 2015 the number of unaccompanied young refugees was about 34 000. The average age of the unaccompanied asylum seekers is 15 years and the majority are boys. Many of the unaccompanied asylum seekers are carrying difficult and often traumatic experiences from their lives before and during the escape. Mental disorders are observed as problems to sleep, nightmares, anger and aggression etc. Others may instead react with introversion and isolation (Socialstyrelsen 2013). The situation is often made worse because of tensions when waiting for the authorities decision on the asylum application. In the cited report it is stated that there is a lack of knowledge concerning methods to prevent mental disorders and emotional problems. It also points to problems of communication and cooperation between different health care institutions and other public bodies such as schools, social care, housing etc. A knowledge survey from the National Board of Health and Welfare (Socialstyrelsen 2015) states that an estimation is that 20 -30 % migrants  are psychological unhealthy. This paper is written by a psychiatrist who maybe have more strict criteria for what is being psychological unhealthy. The author also points to that in many cultures there is a stigma on psychological disorders that may lead to that individuals tends to describe their health problems as somatic. It seems to be problematic to compare and correct understand statistics concerning psychological disorders and diseases. This is underlined when comparing other reports from the Public Health Agency of Sweden, such as shares of Swedish teenagers who are (self-)reporting somatic or psychological problems. The shares presented here are rising and are between 20 – 50 %, and girls seem to be most vulnerable. The reported problems are related to socio-economic conditions (Folkhälsomyndigheten 2015:15137) and stress and pressure caused by studies, their situation in school, (Folkhälsomyndigheten 2016:16003). The reports points to a more individualized society and the testing and grading in schools where the demands for performance is pressure that not all young people can cope with (Cf. Eriksson 2012).

By Swedish law the asylum seekers are entitled to have a health screening. Results points to that a number of children and young people have health problems from badly handled fractures, back pain, heart and circulation problems, knee problems etc. In a report from Malmö it is stated that 85 % of the young unaccompanied asylum seekers are remitted to other medical institutions for further examination or treatment (Socialstyrelsen 2013). This report about medical problems is from some years ago when the number of  young unaccompanied refugees was less then 10 % of the number year 2105. This may indicate that at the time the organization and resources for medical examinations and further treatment was more adjusted to the situation, while it is now reported that the authorities now have problems to carry out the situation. As well as for the mental problems it seems to be a lack of communication and cooperation between different societal institutions and public bodies that are engaged in the asylum seekers’ health problems. Some groups are reported as especially vulnerable and are sometimes paid to less attention. That is girls and young women and hbtq persons.

Focussing health, learning and the school

From a large scaled survey Ascher (2010) points to that newly arrived children list the parents and family (often labelled “Mother”) as the most important factor for their health and wellbeing. As the second most important factor for their wellbeing they listed the school. For the unaccompanied young asylum seekers one would presume that the school is even more important. Ascher discuss the school as an institution that provides normality and belonging (see also Wernesjö 2014), and that school provides structure and a predictable every day life, which he sees as a comforting factor. This description of the impact of going to school would then be salutogen, meaning promoting health and wellbeing. This reasoning corresponds to the early writings about KASAM (Känsla av SAMmanhang) as presented by Antonovsky and his studies of persons who survived the Holocaust, and their lives afterwards.

But the school today is also about performing, passing tests and thresholds.

Eriksson (2012). Many of the young immigrants are ambitious and have great dreams for their future. But as we know from official statistics only about ¼ of the late arrived (from about 15 years old) will pass the requirements for entry in national programmes in upper secondary. Speaking with Eriksson (2012) one should have questions about, and discuss,

A most popular, but also heavily criticised, model for human behaviour is the hierarchy of needs presented by Maslow. Though this model nowadays is seen as dubious and badly verified by empirical findings, one may find that it has an explanatory potential. Just thinking on our own everyday life; if there are physical threats, economic problems or an on going dispute with family or friends. Then, most of us would not be able to perform well and handle different kinds of problems. Ahrén (2010) proposes a modernized and elaborated model presented by Kendrick (2011). She also proposes a more basic model that may serve well when discussing health and learning: 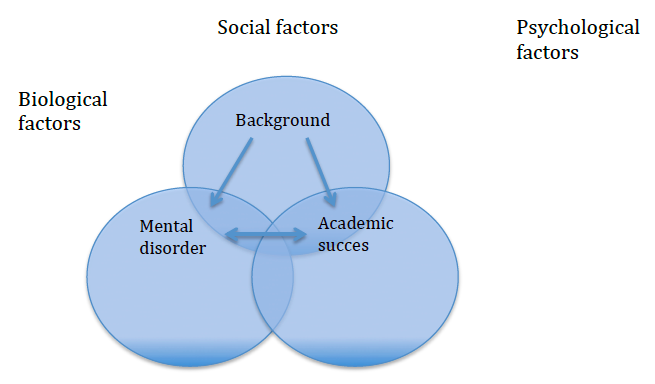 This study is in an initial phase and will be continued by:

In all stages communication with partners for discussions about topic, aims, investigation design, sharing results and conclusions, and, hopefully, be able to formulate recommendations and good practice.